Today I’m feeling the love for the ugliest plane in the U.S. Navy, the A-6 Intruder.  This all-weather carrier based ground-attack aircraft has been lovingly nicknamed “Double Ugly”, “Drumstick”, and even “Iron Tadpole”.  The unique side-by-side crew configuration led to the rounded and big-nosed aspect of this hard-working plane.

Developed to not only to replace the aging propeller-driven AD- 6/7 Skyraider, she was designed for “over-the-shoulder” launching of nuclear weapons.  Never used for the latter role, variants of the Intruder have served the Navy and Marine Corps from 1963 to the present day. 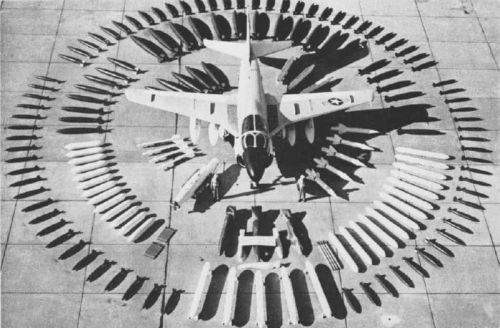 The sturdy airframe and advanced suite of electronics allowed the Intruder to provide close air support for ground troops in Vietnam even through the blinding cloud cover and torrential rains of the monsoon season.  The first loss of an A-6 to combat occurred in 1965 with both crew surviving.  Of the 84 lost during the war, only 2 were shot down in air-to-air combat.  Intruders saw combat later in Lebanon, Desert Storm, Somalia, and Bosnia before they were retired.

In 1991 Congress cancelled the planned A-12 Avenger II replacement for the aging Intruders.  Avionics and electronics upgrades allowed them to remain operational through 1997 until sufficient LANTIRN-equiped F-14 Tomcats and F/A-18E/F Super Hornets came into service.  The specialized EA-6B, known as the Prowler, still remains in service however.  With it’s stretched airframe, fully integrated electronic warfare systems, and four-man crew, the EA-6B Prowler proudly honored its Intruder heritage with service in Iraq and ongoing roles in Afghanistan.

P.S. – Don’t forget the Stephen Coonts novel Flight of the Intruder or the film of the same name starring Danny Glover and Willem DaFoe.  Both are available at Amazon.com .

Comments Off on Warbirds – A-6 Intruder

In honor of the Hawker Siddley Harrier’s first flight on April 1, 1969 , I present you with the latest edition of our ongoing “Warbirds” series.

The Harrier, as most people consider it, is actually a family of aircraft.  The first and only operational family of jump jets ever developed.  The main versions of the family in order of development are the Hawker Siddeley Harrier, British Aerospace Sea Harrier, Boeing/BAE Systems AV-8B Harrier II, and BAE Systems/Boeing Harrier II.  Initial work began on the series as early as 1957 in cooperation between airframe maker Hawker Aircraft and engine manufacturer Bristol Engine Company on the project P.1127.

What came from this project was a fixed-wing aircraft that absolutely embodies the spirit of aviation innovation.  First operational jump jet.  First capable of hovering.  First to fly backwards (WHAT!).

When you think of the Harrier, the first thing that comes to mind is often the Falklands War between Britain and Argentina in 1982.  Deep in the South Pacific and over 8,000 moles from home, the Harrier saw her first combat in some of the world’s worst flying conditions.  While deployed, Harriers flew over 2000 sorties – over six per aircraft per day.  though 10 Harriers of various types were lost to ground fire or mechanical failure, none were lost in air-to-air combat.

After the war, the first generation of Harriers saw continued Cold War tasking, but declining service with British and American forces.

Most of the continuing production was earmarked for export to NATO and allied countries.  But, this wasn’t because of any failings.  Rapid advances in avionics, navigation, and propulsion would give birth to a next generation of jump jet.  A new partnership between McDonnell Douglas and British Aerospace would soon bring the world the Harrier II.  These aircraft serve still today and have seen combat during the Gulf War, Yugoslavia, the Iraq War and Afghanistan.  Though slated to be replaced by the Lockheed Martin F-35B Lightning II, the Harrier II still serves the USMC, British armed forces (G-5/7/9 series), Spanish Navy, and Italian Navy.

Comments Off on Warbirds – AV-8A Harrier

What to remember about January 13th…

Comments Off on Lost and Found – January 13th Edition

Posted on January 2, 2017 | Comments Off on Lost and Found – January 2nd Edition

What to remember about January 2nd…

Comments Off on Lost and Found – January 2nd Edition

Today’s installment of Warbirds brings us to the supersonic, swingwing marvel the B-1B Lancer.  Unofficially known as the “Bone” (from B-one), the development and deployment of this strategic bomber increased pressure on the Soviets and helped shorten the Cold War.  The B-1’s first flight took place on December 23, 1974.

Envisioned in the 60’s as a Mach 2 replacement for the B-52, it was hoped that the Lancer would have the range and payload capacity to meet or exceed her predecessor.  Actual development of the aircraft didn’t start until the 1970’s and the design changed many times as political views of what her mission would be were revised.  President Carter actually cancelled the B-1A program after 4 aircraft were built in another misguided attempt to placate the Soviet Union.  But, the Reagan administration resurrected the project in 1981 to counter mounting worldwide Soviet adventurism.  Subsequently, Rockwell received a contract in 1982 and B-1B became operational with the U.S. Air Force October 1st, 1986. 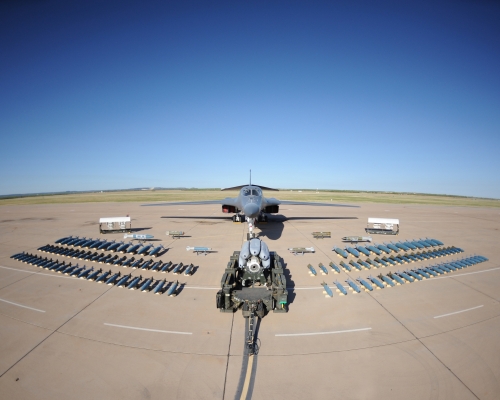 It was known early on that the Lancer would not be able to take the place of the Venerable B-52.  What was envisioned was a strategic bomber that had the ability to elude Soviet radar and strike without warning deep within enemy territory.  Many viewed this capability as destabilizing in a Nuclear world.  However, the necessity of countering the perceived threat of the B-1B forced the Soviets into ever more unsustainable research, development, and defense spending.   Without ever delivering a nuclear weapon, the Lancer helped shorten the war.

In the 90’s, further development proceeded on the “Advanced Technology Bomber” (which became the B-2 Spirit), leading to a role change for the B-1B.  Part of the fleet was converted over to a fledgling conventional munitions capability.  However, engine issues prevented the Lancer’s participation in the Gulf War.  It would be 1998 before B-1Bs would take part in Operation Desert Fox and undertake conventional combat operations.  That successful mission against Saddam Hussein’s regime would presage deployments in Kosovo, the invasion of Iraq, Operation Enduring Freedom, and they continue to perform “armed overwatch” in support of ground forces in Afghanistan today. 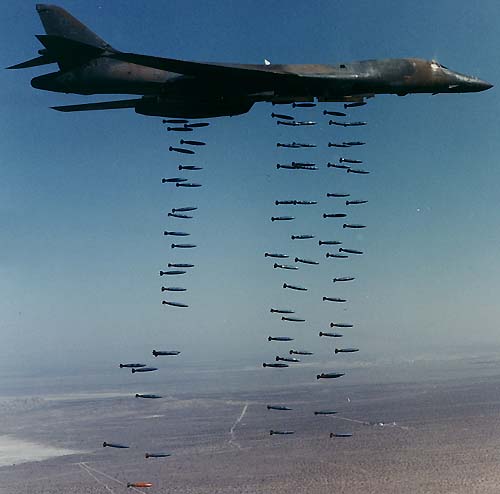 Of the original 100 built, only 93 remain in the inventory and a good portion of those are in reserve storage.  Without the refits and upgrades that the Obama administration has placed on hold, the aging B-1Bs are looking ahead to retirement in the 2030s.  Debate continues over the true effectiveness of the Lancer as further deployment of the B-2 Spirit Stealth Bomber continues.

Further information on “Bone” can be found on the U.S. Air Force website on the B-1B Lancer Fact Sheet or in the Air Force documentary below.

Comments Off on Warbirds – B-1B Lancer

Today’s installment of Warbirds brings us to the venerable AH-1 Cobra / Super Cobra / Viper.  This iconic helicopter saw its debut in Vietnam and still serves to this day.  The AH-1’s first flight took place on September 7th, 1965.

In the late 1950’s Bell Helicopter was committed to the US Army’s air cavalry concept.  With  the realization that the UH-1 “Hueys” were more vulnerable to North Vietnamese and even Viet Cong ground fire that first envisioned, it was decided that an armed escort was needed.  To fill this role some UH-1s were upgraded to carry multiple machine guns and rockets.  However, their light armor, slow speed, and open architecture meant that they were ill suited to close support and a would provide no permanent solution.

During the development of the “Huey”, Bell had begun work on designs for an attack helicopter.  The D-255 “Iroquois Warrior” was their concept mockup that led to the building of the “Sioux Scout” built on the Model 47 airframe.  It included many of the modern attack helicopter elements such as a tandem cockpit, weapons mounts on stub wings, and a chin mounted weapons system.  However, the underpowered and undersized nature of the scout was deemed to be unsuitable.  The Army decided to go with the Advanced Aerial Fire Support System (AAFSS).  10 years and millions later, the spawn of the AAFSS, the Lockheed AH-56 Cheyenne was cancelled.

Despite not being chosen to compete for AAFSS, Bell went ahead with their development of a new attack helicopter based on many of the tried and true components in the UH-1.  With AAFSS development proving costly and slow, the Army announced that they were looking for quick development of an interim gunship.  Presented to the Army in 1965 as the Model 209, Bell’s prototype rolled out on September 3rd and was in the air just 4 days later.  Only 7 months later the AH-1G was selected over the other competitors – the  Boeing-Vertol ACH-47A, Kaman HH-2C Tomahawk, Piasecki 16H Pathfinder, and Sikorsky S-61.

With its own increasing use of helicopters, the Marine Corps was highly interested in adding a dedicated gunship to its growing fleet of support aircraft.  The Corps, however, determined that they needed increased reliability and firepower.  Out of these requirements Bell developed a twin-engine version designated the AH-1J.  Further upgrades were ordered for future Army models that would include better avionics, more powerful engines, and integration of the TOW weapons system for greater anti-tank capability.  These would lead to upgrades and designations of AH-1F, Q, and S.

Cobras of all sorts saw over a million operational hours during Vietnam.  They would also be used in the Invasion of Grenada, Operation Just Hope, and the Invasion of Panama.  By the 90’s, the Army began its transition from the Cobra to the newer AH-64 Apache.  Though being phased out, Cobras still played a vital role in the Gulf War, Somalia, and even some humanitarian operations.  the last Army AH-1 left service in March of 1999.

The Marine Corps was also interested in acquiring the Apache, but the request was denied by Congress.  It was felt that the cost of creating a ship-based version would be too costly and that the Marine Corps would be the only customer for such a specialized craft.  In response, a new wave of upgrades was applied to the fleet of Marine SeaCobras; turning them into SuperCobras.  models AH-1T, T+, and W would result in greater reliability, more power, integration of more advance avionics, and the capability to utilize AIM-9 Sidewinder and AGM-114 Hellfire missiles 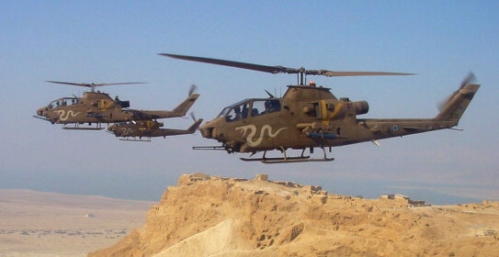 By the end of the 1990’s, another denial by Congress of the Marine Corps acquisition of Apaches led to a new development wave.  Today’s AH-1Z Viper is the result.  It features a new four-blade, composite rotor system for better battle damage tolerance, reduced noise, and increased flight characteristics.  Additionally, the Viper has longer stub wings with an increased payload capacity.  And, to fully take advantage of increased force integration and communication, a fully modernized suite of avionics and electronics was included.  With these upgrades, the venerable AH-1 has continued to fill a critical vital role in both Iraq and Afghanistan during the Global War on Terror.

Over 2500 AH-1 aircraft of various models have been built since 1965.  They have seen service on battlefields around the world and with the armed forces of the US, Iran, Israel, Japan, Pakistan, Taiwan, and Turkey.  Today you will even find retired Army Cobras working in the US Forest Service and the Florida Division of Forestry for fire monitoring and suppression.

Below you can enjoy a clip of Cobras and Vipers in action.

Comments Off on Warbirds – AH-1 Cobra ,Super Cobra, and Viper

What to remember about July 15th…

Comments Off on Lost and Found – July 15th Edition

Lost and Found – May 15th Edition

What to remember about May 15th…

Comments Off on Lost and Found – May 15th Edition

What to remember about April 27th…

Comments Off on Lost and Found – April 27th Edition

What to remember about April 25th…

Comments Off on Lost and Found – April 25th Edition